Speaking while the video played on a projector screen, Montgomery County Police Chief Marcus Jones narrated a 28-minute-long compilation of body camera footage excerpts and a recorded phone call between police and the driver, 21-year-old Ryan LeRoux, before the July 16 shooting in Gaithersburg. Police responded to a call about a McDonaldŌĆÖs customer who refused to pay or remove his vehicle from the drive-thru.

Jones said officers who initially arrived at the scene saw a handgun in the front passenger seat and called for backup when LeRoux refused their commands to step out of the vehicle. A half-hour standoff ensued.

Officers taking cover behind a shield approached LeRouxŌĆÖs SUV and placed “stop sticks” in front of the vehicle. Police also placed a body camera in the drive-thru window to get a better vantage point of the gun in his car, Jones said.

AFTER MARYLAND FATAL SHOOTING AT MCDONALD’S, 4 OFFICERS ON LEAVE

Video played Tuesday appeared to show LeRoux moving inside a parked car, apparently sitting up from a reclining position, moments before four officers opened fire on him. Jones said police recovered a loaded Glock 47 from LeRouxŌĆÖs lap ŌĆō though he did not disclose whether investigators believe LeRoux raised a weapon or posed a threat to police at any point leading up to the shooting.

Jones said there was no evidence that LeRoux fired at officers. A woman from the police departmentŌĆÖs emergency command center had spoken to LeRoux via his cellphone. LeRoux said he saw the officers and complied with their commands to raise his hands. 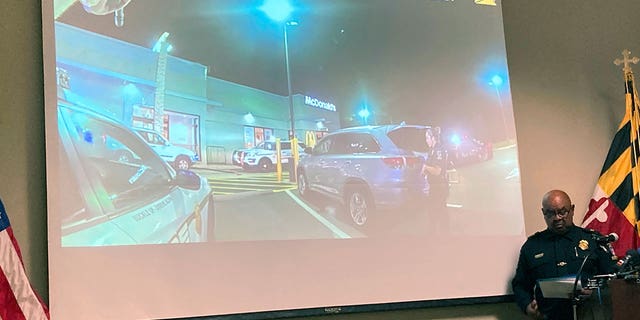 “I can hear them just fine,” he said.

“WeŌĆÖre just trying to help you here,” she told LeRoux, asking him to extend his hands out a window.

Jones said the officers didnŌĆÖt see LeRouxŌĆÖs hands up or out the window.

“WhatŌĆÖs going on, man?” the sergeant asked. “Hello? He just hung up on me.”

A crisis negotiator was en route to the scene but didnŌĆÖt arrive before the shooting, Jones said. 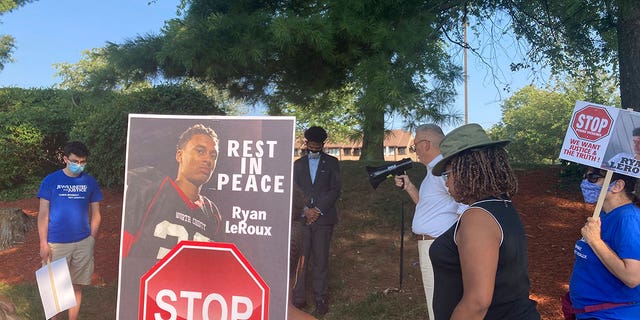 Activists gather for a vigil on Tuesday, July 27, 2021 near the McDonaldŌĆÖs restaurant in Gaithersburg, Md., where Ryan LeRoux, a 21-year-old Black man, was shot and killed by police on July 16.
(AP Photo/Michael Kunzelman)

Montgomery County City Council used LeRouxŌĆÖs death to emphasize the need “for appropriate alternative responses to mental health crises,” arguing “policies and procedures are reviewed to provide our police officers with the tools they need to successfully deescalate these types of situations.”

LeRoux died at a hospital. Speaking to reporters later Tuesday, his mother, Rhonda LeRoux, said he was depressed, had lost his job and girlfriend, and was grieving the recent death of his grandmother. She said her son was living out of his car and had legally purchased a gun to protect himself.

The four officers involved were placed on administrative leave, a standard procedure after a shooting.

All four officers are White, and LeRoux was Black, police department spokeswoman Shiera Goff said. The Howard County StateŌĆÖs AttorneyŌĆÖs Office will review LeRouxŌĆÖs shooting under an agreement with its counterpart in neighboring Montgomery County.

The Associated Press contributed to this report.